You don’t need to be Twitter famous to make money from viral tweets. A growing number of Twitter users –- many of them with very few followers of their own — have glommed onto an inventive way to harness the power of tweets that go viral to make a few […]

You don’t need to be Twitter famous to make money from viral tweets.

A growing number of Twitter users –- many of them with very few followers of their own — have glommed onto an inventive way to harness the power of tweets that go viral to make a few bucks for themselves.

These savvy users do this first by finding a tweet that’s garnering a lot of attention. They then use the reply tool to point the Twitterverse toward a brand, which, in turn, pays a small fee in exchange for the mention. None of this happens through Twitter’s established advertising system, meaning the company doesn’t get a cut of the transaction, and it may break Twitter Inc.’s rules requiring disclosure of payment for promotion.

Here’s how it plays out for Blake Forbes. The 20-year-old college student from Austin, Minnesota, runs the Twitter account @BirdExecutive. It only has about 8,000 followers. That’s paltry compared with the likes of Justin Bieber or Barack Obama, each of whom have more than 110 million followers. But the lack of stardom isn’t stopping Forbes from making some easy money.

Forbes looks for tweets that seem poised to take off — say, a funny joke or a clever play on words. In one case, a picture of a steamroller going over someone’s back. He and his friends then help accelerate the popularity of the postings by sharing them among their accounts, which collectively have tens of thousands of followers. When the tweet goes viral, reaching hundreds of thousands of followers, retweets and likes, a brand might reach out to Forbes to do a promotion and pay him about $30. Forbes has done about seven or eight promotions, netting him around $200 for posting memes.

“I wouldn’t say it’s a way to make a ton of money, it’s just extra,” Forbes said. It’s mostly about “having fun on Twitter and getting some money as well.”

This ephemeral advertising blitz is the latest, most opportunistic evolution of the social-media based influencer economy, in which regular people get paid to hawk brands to followers. The twist here is that the person whose tweet goes viral and lures advertisers may not have a significant following, or even have an expertise in the brand they’re trying to promote. Sometimes the viral tweets aren’t even original ideas. Forbes’s steamroller gag, for example, had been posted by an account named @meow about three weeks earlier.

Anthony Trucco, a recent college graduate and self-described “meme lord,” also enjoys the extra pocket cash from a viral tweet. Trucco, who has about 6,500 followers on Twitter and 1.3 million on TikTok, overlays scenes from the animated SpongeBob cartoon show with popular songs like “Sicko Mode” by Travis Scott and Drake. When a comedian with a large following shared one of Trucco’s tweets, it got launched into the stratosphere of virality, resulting in a promotion deal for Ocean Galaxy Light.

The product, one of the most frequent promotions on Twitter, projects a light pattern on the ceiling and contains a Bluetooth speaker. The website is run by a few friends in Southern California, all college students, who find viral tweets and reach out to users to promote their product. Depending on how popular the tweet is, the site pays $20 to $60 for a promotion, said Parsa Khademi, one of the people running the Ocean Galaxy Light website and Twitter account. Khademi looks for promising tweets but lately users have come to him seeking a promotion.

For Ocean Galaxy, a promotion linked to a viral tweet can yield three or four orders for the lights, which sell for $50, Khademi said. The partners work with a fulfillment center in the U.S. and Japan to process and complete customers’ orders. Ocean Galaxy Light brought in about $7,000 to $8,000 in revenue from Twitter in July, Khademi said. It also advertises on Facebook and Instagram, and racked up $35,000 in sales across all platforms in that month.

Because these transactions take place outside Twitter’s established advertising system, companies have to tread carefully. Failing to disclose payment for a promotion is breaking the social media company’s terms of service, a spokesperson said in an email.

Ocean Galaxy Light changed its marketing practices in April, Khademi said, after running into problems with Twitter’s terms of service. Users with a viral post used to “quote tweet” an old Ocean Galaxy Light tweet to promote the brand, but Khademi shifted to having users tweet the link themselves.

Other advertisers using this tactic include a sink strainer that prevents messes while doing the dishes and another account that sells vintage basketball apparel. The advertisers didn’t respond to requests for comment.

The practice of having people do promotions for products has gained steam on other platforms, such as Instagram, where meme accounts promote artists on Spotify or fashion brands, said Shamsul Chowdhury, vice president of paid social at Jellyfish, a digital marketing company. But Instagram requires paid partnerships to be disclosed. Ads on Instagram can appear in the form of a post by a brand, or an influencer can post branded content with the app’s labeling tool, or disclose that it is an advertisement with the label #ad.

Twitter requires users who are paid to tweet to label that tweet as an ad, though it’s difficult for the company to enforce since the deals happen outside of its advertising system. Twitter doesn’t actively search for violators, but will act on a tweet if it’s reported. “Any enforcement would be dependent on incident specific context,” a spokeswoman said in a statement, adding Twitter could give a warning, limit the tweet’s reach or potentially suspend an account for violating its disclosure rules.

Websites that want to promote their product see ad placement with viral tweets as more cost-effective than competing with other advertisers on Twitter’s main feed, Chowdhury said. Plus, riding the coattails of a viral tweet bypasses the need to use Twitter’s formal advertising system and could allow for a more direct interaction with the user.

Trucco, of SpongeBob Twitter fame, also has a full-time job as a business analyst at Northrop Grumman Corp. But he still finds the time to make memes for artists and brands on social media. He appreciates the money.

“It even means a lot to me,” he said. “I’ll never be somebody who forgets how much $50 is worth. Anybody would appreciate anything, whether it’s 50 bucks or 100 bucks, or 25 bucks. There’s nothing to lose by putting it out there.”

— With assistance by Kurt Wagner

Before it’s here, it’s on the Bloomberg Terminal.

Wed Sep 9 , 2020
It’s a common corporate practice to use philanthropic pursuits to improve both their communities and public images. Some organizations donate both funding and manpower through formal philanthropy programs. Others choose to give regularly to selected charities. But for Pamela Davis, that wasn’t enough. Davis decided to build an organization with […] 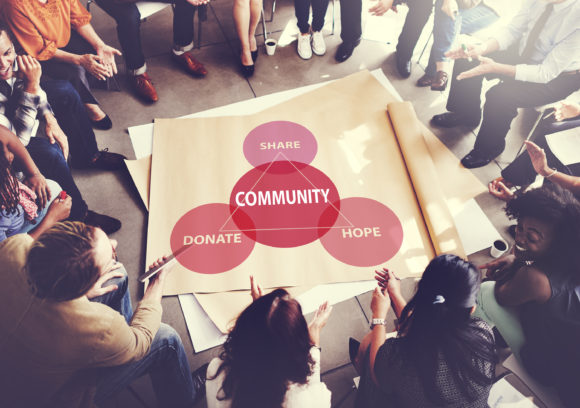