As Republicans repeatedly warned of a socialist takeover and a “radical left” agenda looking to transform the county, some of President Donald Trump’s closest allies spent the first night of the GOP’s nominating convention seeking to paint a more personal portrait of the president. Since running for president in 2016, […]

As Republicans repeatedly warned of a socialist takeover and a “radical left” agenda looking to transform the county, some of President Donald Trump’s closest allies spent the first night of the GOP’s nominating convention seeking to paint a more personal portrait of the president.

Since running for president in 2016, Trump has typically opted for large campaign rallies and gatherings instead of more intimate events to meet and socialize with voters and supporters. But with the coronavirus pandemic largely halting in-person campaigning, the nearly all-virtual Republican convention gave those who know him best a chance to show a more personal side of a president who has been urged by some in the party to soften his tone amid sinking poll numbers.

Rep. Jim Jordan of Ohio, one of the president’s fiercest allies in Congress, usually gives fiery speeches defending the president and decrying Democratic policies, most notably during the impeachment hearings late last year. But midway through his remarks Monday night, Jordan pivoted from his attacks on Democrats to share “something most Americans never see – how much he truly cares about people.”

Jordan recounted a story from two years when he was speaking by phone with Trump and asked if the president would talk with the father of the congressman’s nephew, who had died in a car accident days earlier.

“For the next five minutes, family and friends sat in complete silence, as the president of the United States took time to talk to a dad who was hurting,” Jordan said in recorded remarks. “That’s the president I know.”

Herschel Walker, a former professional football player, gave a similar testimonial about Trump and his decades-long friendship with the president. He described Trump as a devoted father who would pause big meetings to take calls from his children. Walker also recounted Trump joining a last minute trip to Walt Disney World with his children and Walker’s family, noting that he rode the famous “It’s a Small World” ride in a business suit.

But Walker also came to the president’s defense, pushing back on some characterizations involving Trump and race. Critics have recently panned the president for his pushback to demonstrations against police brutality and systemic racism.

“It hurts my soul to hear the terrible names that people call Donald. The worst one is ‘racist.’ I take it as a personal insult that people would think I would have a 37-year friendship with a racist,” said Walker, who is Black.

“People who think that don’t know what they are talking about. Growing up in the Deep South,” he continued. “I have seen racism up close. I know what it is. And it isn’t Donald Trump.”

The personal stories come after Democrats spent much of their own nominating convention last week sharing personal stories about Joe Biden, who argued that “character, compassion [and] decency” are on the ballot in November. Democrats also used a large part of their convention attacking Trump’s character and detailing what they believe are the missteps of his administration.

Cartoons on the 2020 Election

As Democrats formally named Biden their nominee, a security guard who was captured on video expressing her adoration for the former vice president when she escorted him on an elevator last year became the first person to nominate him for president.

The party also gave a prime-time speaking slot to a 13-year-old boy who has a stutter and met Biden at a New Hampshire campaign stop last year. Brayden Harrington recounted how Biden told him “we were members of the same club.” While campaigning during the Democratic primary, Biden frequently spoke about overcoming a stutter when he was a child.

In between live speeches delivered from an auditorium in Washington, D.C., Trump hosted a number of people from different locations of the White House with interview-style conversations.

From the East Room, he spoke with half a dozen essential and front-line workers – nurses, truck drivers and Postal Service workers – who continued to work through the coronavirus pandemic, though no one wore masks and there was little social distancing. Later in the night, Trump appeared in the Diplomatic Reception Room with people who had been taken hostage in foreign countries and whom he helped bring back to the U.S.

The appearances were an early display of how Trump will use the White House during a nominating convention in an unprecedented move that has sparked backlash among critics over the use of federal property for political purposes. On Thursday, the president will deliver his acceptance speech from the South Lawn.

Tue Aug 25 , 2020
WASHINGTON (Reuters) – Jerry Falwell Jr, whose endorsement helped power Donald Trump to the U.S. presidency, agreed to immediately resign as head of the Christian university he runs but then withdrew his resignation following media reports about it, the school said in a statement. The statement late on Monday from […] 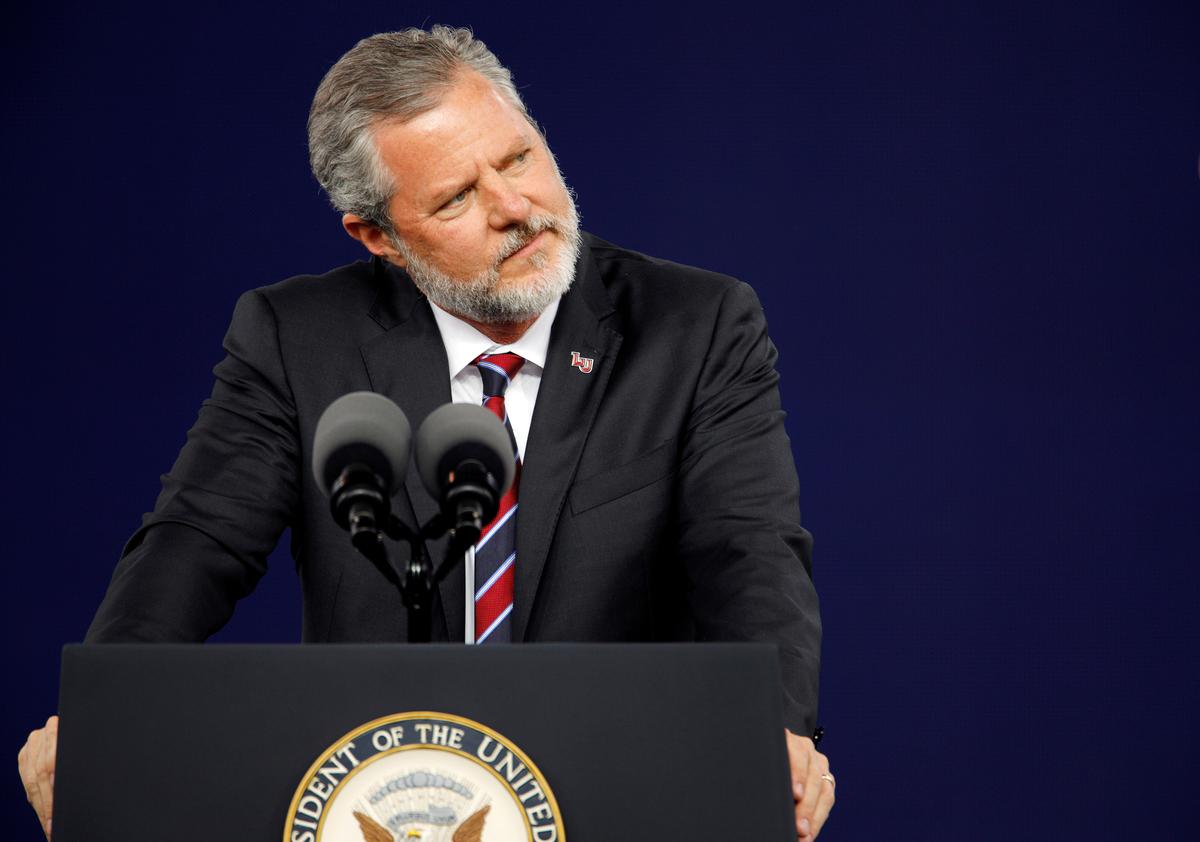